It begins with what is supposed to be a 550 mile drive from Santa Barbara to Tonto National Forest in Arizona, but thanks to errant directions from the GPS it’s now an 850 mile drive with a detour through Tucson. I’m making great time and around 8:00pm with just 15 miles from where I think I am stopping for the night, I have a casual dinner at Swenson’s. Minutes later I realize I’ve made a horrible mistake, having driven 150 miles out of the way. I reverse course and get back to where I should have turned off originally, but now it’s almost midnight. Exhausted, I give up on getting to the campsite tonight and with the help of the “Around Me” app on my iPhone, find a Comfort Inn with availability for the night.

Duffy at the front desk informs me that not only is his hotel full, but all hotels in the area are booked thanks the Barrett-Jackson car auction being in town. He calls around as a favor to me, but to no avail. I ask what’s up the road from here, thinking I can make it a little further to the next town, but find out there is nothing between here and the campsite except cacti and dirt, with the campsite being another 100 miles into the middle of nowhere. I let my wife know that I have no other option but to drive on into the night. “I wish I drank coffee,” I say to her. She suggests I drink some soda at least for a caffeine pick-me-up. I guzzle two bottles of Mountain Dew for maximum caffeinage before getting a follow up call from her saying she found me a room at the local Holiday Inn. I lie in bed until 2am hopped up on caffeine, with my alarm set for a 6am wake up.

The drive into Tonto National Park at Sunrise with “La Grange” by ZZ Top blasting on the radio and passing places like Whiskey Springs and Kitty Joe Creek is manna for anyone who loves the Old West.

It’s 8am when I arrive at the Grapevine Group Site on Roosevelt Lake in Tonto National Forest. I’m the first to arrive, or so I thought. Turns out the rest of the tent assemblers arrived at 2am and were sleeping in their RVs nearby.

Four adults and three kids, we erect nearly 50 tents for the 160+ other volunteers who will be arriving around 2am tonight. It is exhausting work, with many of the tents incomplete, broken or lacking instructions, but we get it done. I installed my slackline in a perfect spot away from the many spiky cacti.

The kids arrive in the dark after a 10 hour drive, exhausted and cranky. Seven hours until breakfast and the 30 minute drive to Apache Nation.

We are broken up into 7 groups of 24 kids and 3 adult supervisors. Each group is shuttled to a different work site, each building a different family a new home. Upon arrival, our site has nothing but a few stakes in the ground and some string hanging between them to mark to outline of the home’s foundation.

The adults, all construction professionals except me, go through the plans and begin to dole out tasks for the kids. Over the coming days we will lay the foundation and install the underground plumbing. 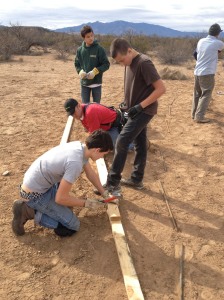 Around midnight, after our first full day of work on the sites, our makeshift tent city is punished by gale force winds knocking down half the tents on the kids, snapping tent poles and shredding two beyond repair. I spend Day 2 back at the campsite reassembling tents, duct taping poles and canvas, and generally attempting to bring order back for the kids, so they’ll have a place to rest their weary heads.

The organizer of this effort is Amor Ministries (www.amor.org) and its founders Gayla and Scott Congdon are an inspiration to me. After witnessing poverty on college junkets, these two have dedicated their lives to improving the lives of others. They’ve built thousands of homes for the needy in Mexico and are now committed to building 1600 homes for the Apaches of Arizona. What I came away with is not so much a dedication to this particular cause, but to the simple idea that individuals can make a big difference. You just have to make the effort and be committed.