It’s been 9 days since I took up knitting and I’m happy to say, I’ve made some progress.

Couple of things I’ve learned along the way: Knitting tight stitches makes for a much nicer result, but it’s very hard to knit tightly with wooden needles. It was frustrating the hell out of me and I was developing a callous (keep your snide comments to yourself), so I recently switched to metal ones. Knitting needles are allowed on the airplane and it’s a great way to pass the time when flying. Unlike reading on an iPad or Kindle, you can start knitting when you board and go right on through to deplaning. Once you get your rhythm, it’s a meditative activity, allowing you to be productive while clearing your mind.

I’m amazed by the reaction I’ve gotten to this resolution, but mostly to this photo of me knitting in-flight. I mean, I’m a 44 year old man who has taken up unicycling, slacklining and jumping stilts prior to this resolution, but it wasn’t until I was photographed knitting in public that I was called “crazy” by several of my friends and relatives. (Would the reactions have been completely the opposite if I were a female?)

As for my knitting skills, I’ve made a few mistakes, which I’ve highlighted in this photo. Some have suggested that I start over again (thanks for the support!), but I’ve decided instead to make this first piece a record of my progress. A sort of progressional totem pole of my knitting evolution. Hopefully, I’ll get better and the progress will be apparent for all to see.

Now for the fun part. I know I said that I wasn’t going to jump right into Yarn Bombing, but I’ve changed my mind. Making a scarf is fun, but to be honest, I don’t wear scarves and no one else would want to wear this debacle when I’m done. Instead, I am going to attempt a yarn bombing of this tree on the Cold Spring Trail in Santa Barbara. It’s marks roughly the halfway point to Montecito Peak and is a favorite destination for many hikers in the area. It’s nearly 30 feet high and right on the edge of the mountain, making it really stand out among the tiny desert shrubs surrounding it.
You can see it from a great distance along the trail.

However, I won’t have a shot at covering the whole tree without some help. So, if you or anyone you know is a knitter, I’d like to enlist your help by asking you to knit a section(s) that I can connect to mine. I don’t care what color, what pattern or even how big you make it, so long as it is yarn and knitted. I simply need to cover surface area. If you help by knitting some swatches and mailing them to me, I’ll give you full credit for your efforts and send you pictures of the finished product for you to share with your friends.

Come on, it should be a blast to be part of a yarn bomb, so please help me by knitting a swatch AND passing this plea along to others. If you don’t know how to knit, now’s a great time to learn. Go to a local knitting shop and I guarantee they will be very happy to teach you. It’s easy and a great little project to do with your kids! 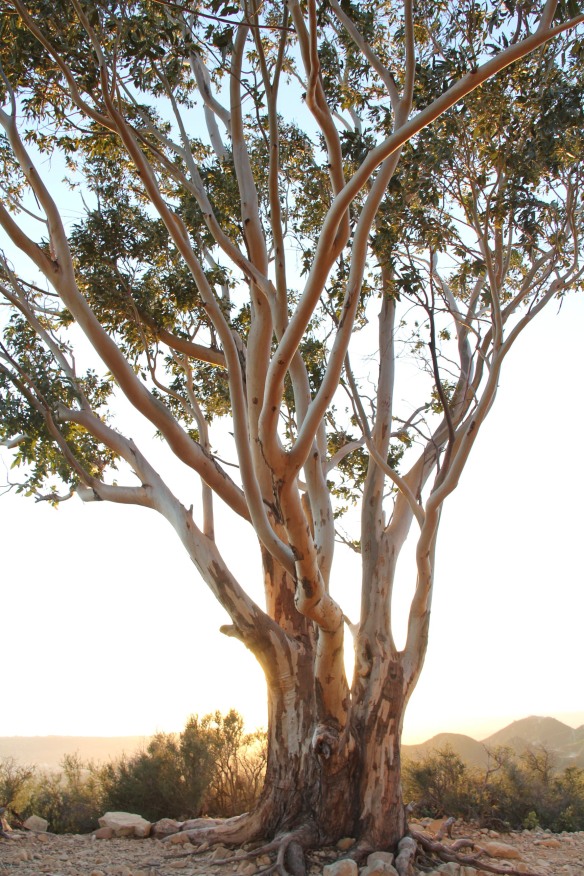